For the OACPS Secretary General, “a climate awakening is urgently needed to save the world’s most vulnerable”. 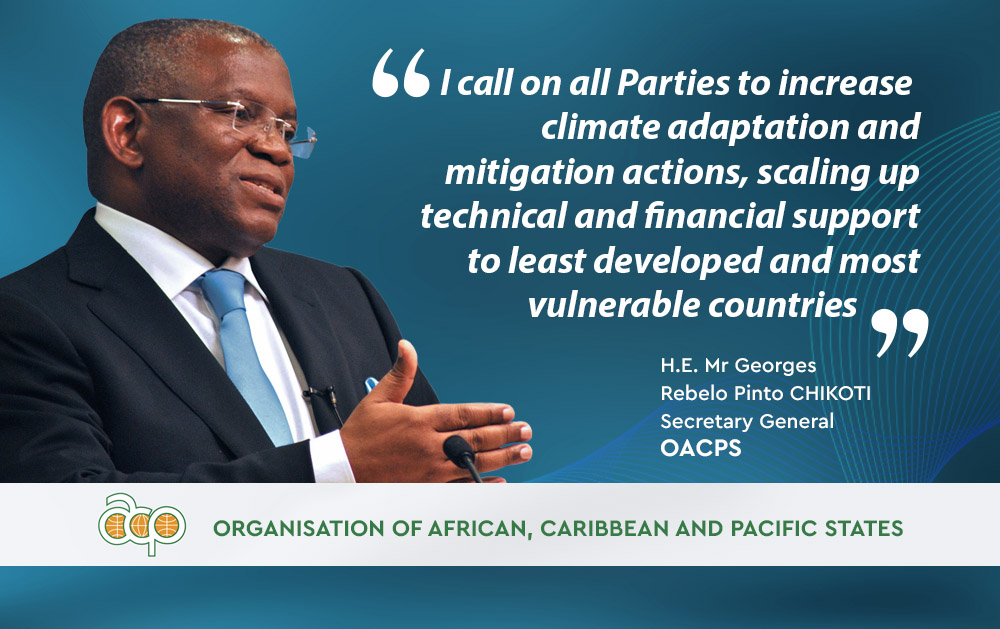 The following is Op-Ed signed by the Secretary-General Chikoti and published in UNInsider:

The full article is also shared below.

Time is fast running out for millions of people living in high-risk situations where their lives, livelihoods, their homes, and their safety are at stake.

Extreme climate and weather-related devastation is occurring at an unprecedented scale, frequencies and intensities. We need only look at the headlines of recent months to see the onslaught of drought, wildfires, hurricanes, torrential rains and floods right across our Blue Planet – North; South; East and West.

The latest Intergovernmental Panel on Climate Change (IPCC) Report[1], published on 6 August, confirms that global warming will rise from 1.5 °C to 2 °C by the middle of the 21st century, unless immediate, profound, large-scale and sustained measures are taken to reduce CO2, methane, and other greenhouse gas emissions.

The report also provides evidence of how human influence and activities have warmed the Earth’s atmosphere, oceans and lands. And how, sadly, those who are currently most affected and vulnerable to future climate shocks are the people who have contributed the least to the global climate emergency.

For the 79 members of the Organisation of African, Caribbean and Pacific States (OACPS), which include the lion’s share of the world’s Small Island Developing States (SIDS); Least Developed Countries (LDCs) and Land-Locked Countries (LLCs), the rising temperatures and the impacts of climate change are higher and more significant than the global average. Yet the level of their greenhouse gas emissions remains negligible. OACPS economies and livelihoods, along with the health and wellbeing of our people and our ecosystems, are becoming even more severely affected. For example, a four-year long drought in Madagascar, the worse in forty years, threatens tens of thousands of people with famine. And in Haiti, heavy flash floods in August further compounded the misery of a population already struggling to recover from the devastating impacts of an earthquake which struck just days before the floods. These exemplify how the poorest and least protected of the world’s population are at the frontline and how they are the ones bearing the full brunt of the climate crisis.

The UNICEF Report ‘The Climate Crisis is a Child Rights Crisis’[2], also released in August 2021, further demonstrates increasing vulnerabilities. It highlights how almost half of the world’s 2.2 billion children are already at ‘extremely high risk’ from the impacts of the climate crisis and pollution. I concur with UNICEF’s Executive Director, Ms Henrietta Fore who said that this is an “unimaginably dire situation”. It is a situation that must be urgently addressed if we are to have any chance of achieving the future we want for ourselves, our children and their children.

With the 26th United Nations Framework Convention on Climate Change (UNFCCC) Conference of the Parties (COP26) convening on 1st November 2021, the 79 member States and six regions and UNFCCC climate negotiators of the OACPS are collaborating with and calling upon like-minded Partners to join their efforts to ensure COP26 delivers on the most pressing issues for developing, vulnerable countries. All 79 Member States of the OACPS are vulnerable countries.

In this regard, it is worth underscoring the view of Ambassador Tosi Mpanu-Mpanu, Chair of the UNFCCC Subsidiary Body for Scientific and Technological Advice (SBSTA), who has pointed out that “Despite several challenges and uncertainties due to the COVID-19 pandemic, the UK Presidency and the Chairs of the subsidiary bodies are working closely and at pace to ensure the readiness of Parties to effectively engage in advancing ongoing work, and finalising outstanding issues of the Paris Agreement rulebook.”

With just over one month to go until COP26 meets the SBSTA Co-Chairs’ efforts to convene informal technical expert events on various topics of priority and import, to prepare for a successful COP in Glasgow that delivers must be commended. It is my view that all Parties should actively engage in the informal events to prepare and be ready for Glasgow. I have heard Ambassador Mpanu Mpanu’s plea that “Time is running out, and the world can no longer afford to delay any decision. We must bring the climate process back on track and to take climate action and ambition forward.” I hope that you will also hear his impassioned call.

On behalf of the OACPS I call upon and urge all Parties to commit to further strengthening their greenhouse gas emissions reduction targets in the next round of Nationally Determined Contributions (NDCs). I also call on all Parties to increase climate ambitions and adaptation actions (giving them the same weight as mitigation), scaling up technical and financial support to least developed and most vulnerable countries, including capacity building, technology transfer and provisions to loss and damage linked to the adverse effects of climate change.

COP26 will be decisive in determining how to expand climate finance beyond the current commitment to mobilise at least US$100 billion in climate finance in the post-2020 period and beyond. As we all grapple with the climate crisis we know that additional, predictable, easily accessible, and clearly defined financial resources needs to be made available to support climate adaptation and resilience building initiatives of the most vulnerable countries, which include all members of the OACPS.

Following through on long-term commitments

While the challenge is huge, it is not insurmountable. But we must act now, and we have to act together. It will require a whole, systemic transformation from local action to global coordination. Our global commitment and momentum to accelerate climate change adaptation and mitigation actions will be crucial. We need to be more expansive in our outlook and exploration, including embracing ecosystem-based approaches to tackle the global challenges of environmental degradation, and the biodiversity and climate change crises. We need to think and act in an integrated and more connected way.

Members of the OACPS realise that clear risk-informed methodologies are required to translate global goals on adaptation and mitigation into national strategies and plans, complemented by adequate finance, capacity building, and technological support.

We the OACPS, a 79 Members-strong international organisation of developing, vulnerable countries spanning the African, Caribbean and the Pacific continents and sea of islands are counting on the strong leadership from developed countries at COP26, to provide clarity, reliability, and predictability on how they will fulfil their long-term commitments to mobilise at least US$100 billion in climate finance in the post-2020 period and beyond, as well as mechanisms to coherently access and channel those funds.  We also welcome the launch of the deliberations on the new, collective quantified goal (post-2025).

Secretary-General of the Organisation of African, Caribbean and Pacific States (OACPS).